Severe drought is putting some areas in central and southern Somalia at an increased risk of famine as acute food insecurity, malnutrition and mortality worsen, the United Nations and the Somali government warned Saturday.

According to the Integrated Food Security Phase Classification jointly released by the Somalia government, aid agencies and food security experts, the situation will worsen through at least September if the current Gu season (late March to June) crop and livestock production fails, food prices continue to rise sharply and humanitarian assistance is not scaled up to reach those most in need.

The agencies said the situation in the Bay region is particularly concerning as the acute malnutrition threshold for famine has been breached in the Baidoa district.

“While a famine classification requires at least two of the three criteria to be met, the increase in acute malnutrition levels and mortality signal that loss of life and livelihoods is already occurring,” the agencies said in a joint statement issued in Mogadishu, the capital of Somalia. 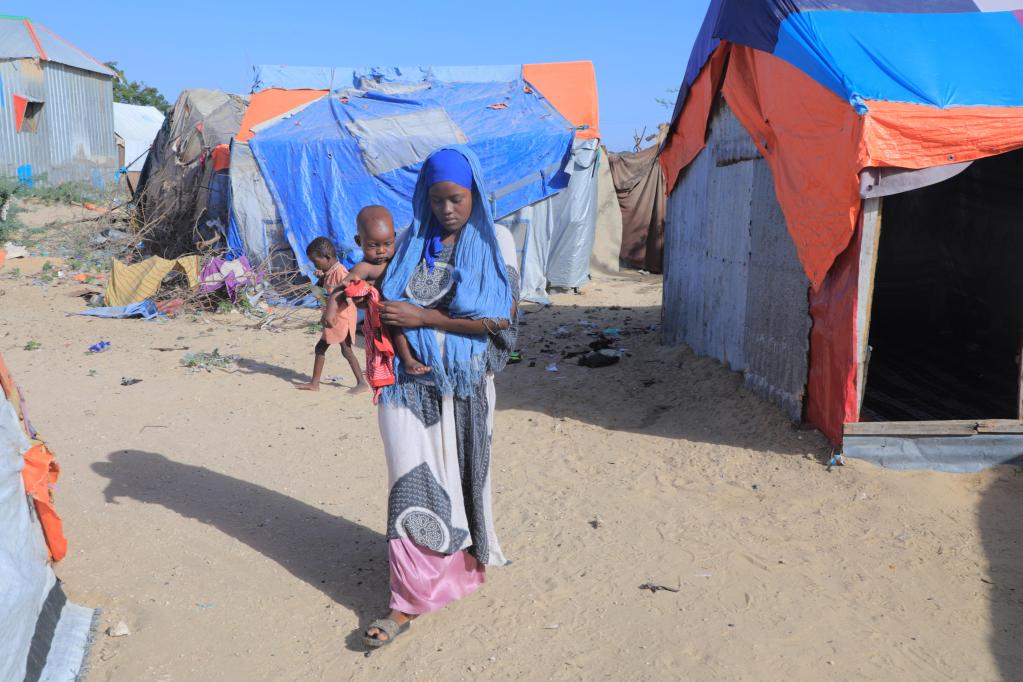 A woman carrying a child is seen at a camp on the outskirts of Mogadishu, capital of Somalia, Jan. 13, 2022. (Photo by Hassan Bashi/Xinhua)

The report says acute food insecurity has continued to worsen across Somalia, with an estimated 5.2 million people (or 33 percent of the total population) already experiencing crisis or worse outcomes, including 38,000 people likely in Catastrophe, as of May, despite the ongoing delivery of humanitarian food assistance.

It says food assistance reached an average of 2.4 million people per month between February and April and has likely prevented the worsening of food security and nutrition outcomes in many areas.

According to the UN, food insecurity and malnutrition are expected to deteriorate further and faster between June and September, and if humanitarian food assistance is not scaled up and sustained, then approximately 7.1 million people (or 45 percent of the total population) are expected to face a Crisis or worse outcomes.

The agencies said urgent and timely scaling up of integrated humanitarian assistance is required to prevent extreme food insecurity and acute malnutrition, including starvation and excess mortality, in areas facing an increased risk of famine through at least September.

“In particular, malnutrition and mortality outcomes in Baidoa and Burhakaba districts in Bay region already point to an extremely concerning situation as of May 2022,” the UN report says.

The country is experiencing the worst drought since the 2011 famine following the failure of three consecutive rainy seasons, resulting in the destruction of livestock and crops.

Somalia has called on the international community to take part in the ongoing emergency assistance to the drought-affected people in the country. (Xinhua) ?